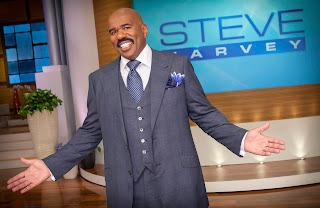 A few of you have asked about the Steve Harvey Show appearance that I did this week. Here goes!

As a stay at home Mom, I get the joys of watching Disney-- all day long. Pretty sure I've seen every episode, of every show at least 1800 times. Lucky for me, during nap time I manage to steal two solid hours of programming, where I get to watch what I want-- which means I usually catch the end of Days of our Lives, Steve Harvey and some of Ellen.

One day, while cracking up at Steve's reaction to a guest, I went to his website and requested tickets. One-because I find him rather entertaining; Two-tickets are free; And Three- They film it in our backyard of Chicago. So I sent a request for two tickets and within 48 hours--VOILA! Tickets were in my inbox.

I received an additional email, following the one with the tickets, asking if there was a question that I would like to "Ask Steve". Well of course I did!! 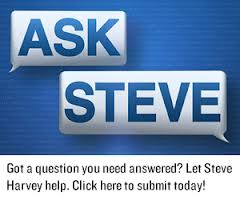 I wanted to ask him this:
"My daughter will shower with us sometimes, when we're running late. I'm curious-- at what age does this become inappropriate? She is very well spoken for her age and I would hate for her to say something that would embarrass my husband or I"

The producers of the show loved the question and wanted to feature me as one of the audience members for the "Ask Steve" segment.

So we arrived early, as requested, were checked by hair/ makeup and wardrobe, mic'd and seated in a special area. When the show started, he asked 3 of us what our questions were-- and then went straight to the next segment. Which means yours truly got axed.

The producers apologized during the commercial break and that was it. I received a few emails later that week about when the show would air, etc.

Fast forward to last Friday. Ken and I were out at Aguamiel for date night-- which is very good for those who haven't been! During dinner, he excused himself to go to the bathroom, so I did what any other person sitting by themselves would do-- I whipped out my phone. I noticed there was a voicemail from an unknown caller so I gave it a listen.

It was John-- the producer I spoke with last time-- and he wanted to invite me back to co host a Valentine's Day Gift Guide with Steve, the following Tuesday.

I was jumping for joy. Literally. I blame the tequila.

We confirmed the details and that was it!

So two days ago, I was put through hair and makeup again and was even treated to my very own green room.

They told me that as Steve revealed the gifts, they wanted me to be excited. I think one of them said, "You've seen Price is Right, haven't you? We want you to be excited like that! Raise your arms! Jump up and down!".

Um okay. But I don't want to look like a TOTAL spaz... just a little spaz.

Well, there was no raising of my arms once I got onstage because I was sweating like a pig. Even if I wanted to, I didn't. And to be honest, we had a lot of fun! I heckled him a bit and gave him a hard time about a few things. In fact, I'm anxious to see what they edit out! 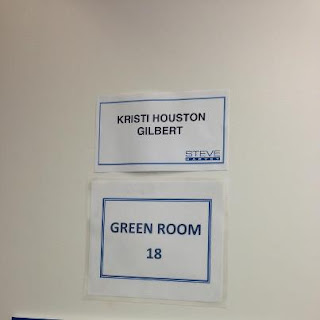 A friend of mine from High School, Alison, works in the NBC Tower so she came down prior to the show to hang out with me and even stayed on the side of the stage during the taping. I can't tell you how nice it was to have a familiar face in the crowd!

Just seeing her there, totally put me at ease. She even encouraged me afterward that I "nailed it". Well, I sure hope so! It's hard to recall everything that was said-- kind of like when you're on stage during a performance and you can't remember how you did.

They gave me and the other audience members parting gifts and then I was on my way back to suburbia. Adios concrete jungle!

So there you have it! Stay tuned for details on when it will air. I am told it will be the week of Valentine's Day. Will definitely keep you posted!