Where have I been? Well thanks for asking! To fill you in, we are renovating our kitchen, having rooms painted, installing new lighting, having our deck stained and front door stripped and restored.

And as if that's not enough, I've been knee deep in the nightmare of potty training my almost 3 year old baby girl. What a task. And I'm proud to announce: we are DONE. Not done as in I-threw-in-the-towel-done-- rather, we were successful and the little rascal is now the proud new owner of 20 different pair of girly underwear. More importantly, DRY underwear.

I attempted to follow the advice of the "Potty train your kid in 3 days" method, where you do nothing but take your kid to the bathroom every 15 minutes. Well, that didn't work. Not one bit. Trying to take a very stubborn and independent child away from her activities to sit on the potty every 15 minutes did not fly with her. It usually resulted in an all out brawl, with me forcing her to sit there, screaming and kicking. Good times. Not to mention, she was running around completely naked for 3 days-- not the best situation when you've got semi-strangers in the house doing renovations in your kitchen. Lucky for us, Luis isn't a pedophile.

Needless to say, I gave up. Back to diapers we went. I took the advice of some friends that said, "she'll do it when she's ready".

I didn't think twice about my decision to give up and try later. The previous days had been complete hell. At one point, I actually cried. Pathetic, I know.

Three days after quitting, Ava woke up, took off her diaper and took herself to the bathroom to go pee-pee. She ran out saying, "Mommy I went pee-pee!". The look on my face must have been priceless because it sent her into hysterics, laughing so hard. I picked up that naked little body and squeezed the crap out of it, paying no attention to the fact that she didn't wipe and now my arm was covered in pee. Who cares?!?! My kid just went pee pee in the potty all by herself! Never have I been so proud-- regardless of my pee covered forearm.

We are now on day 6 and she is on a roll! In fact, last night was the first night without a pull up and (drumroll please!!) no accidents! WOO HOO! Who would have thought one would get so excited over this?!

She gets to pick from a sucker or fruit snacks for #1's and she gets a popsicle for #2's. She also gets a sticker for each "result". In fact, she has almost covered her sticker chart with stickers. When it's completely filled, I'm taking her to the store to pick out a "fancy pink watch", the prize she wants most. You got it kiddo! Your wish is my command-- just keep doing your doodies and dookies on the pot.

In other news, Jack is officially mobile. Little man is a rolling, scooting machine. Which means I now need to try and figure out how to childproof a kid's potty so your infant doesn't stick his hand in his sister's "mess". Ahhh. The joys of motherhood. Ain't it grand?!

Ain't no stoppin' us now! 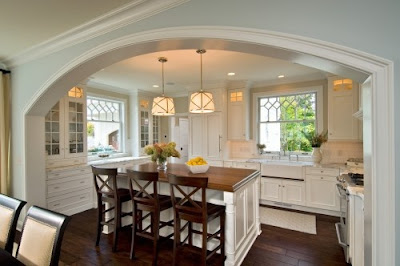 We began our mini-kitchen remodel today! I suppose I have Pinterest to thank for our newest venture-- well that and that fact that my dear friend Kate (of Kate Marnell Interiors) is an amazing interior designer  and is always showing me the things she's purchased for clients.

The combination of Pinterest and Kate has sent me up the creative flagpole. I am literally going nuts, planning all sorts of crazy-redecorating schemes.

Anywhooooo, this picture (that I found on Pinterest) is the inspiration for our new kitchen!

As you can see by the before pics below, we are tearing down a wall that separates the kitchen from the living room. I've always disliked it, as it cuts the rooms off, making the place seem smaller and doesn't allow for the open space living I LURV! The only thing that I will miss is the large pantry. Maybe with less food, I'll eat less-- in hopes to weigh less!

Here are a few before pics, as well as during-demo pics (forgive my blurry iPad pics): 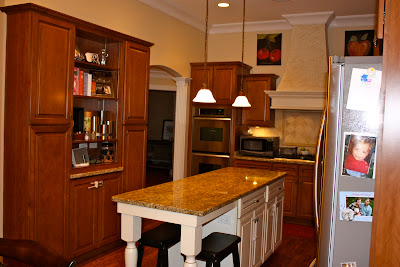 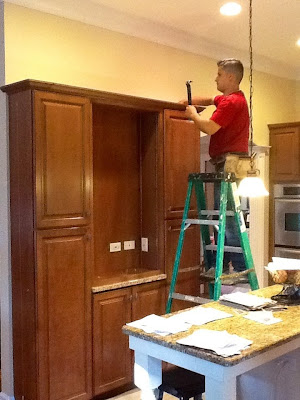 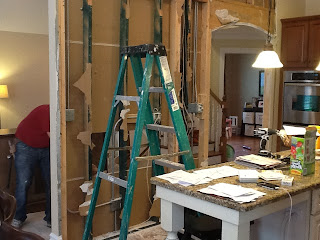 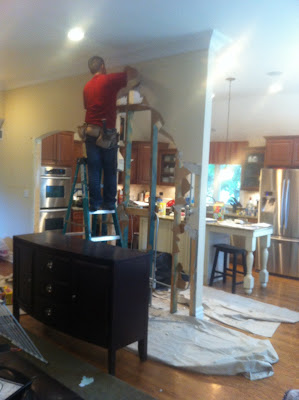 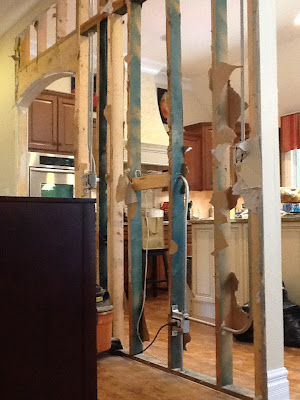 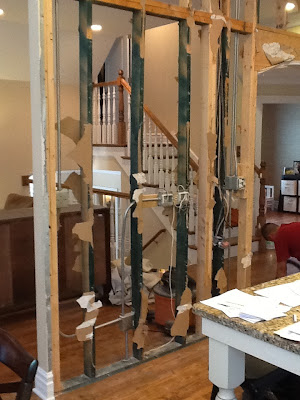 It doesn't look like much now, but I can already feel the open-ness! Woo Hoo! The two by fours come out tomorrow and BAM- No more wall!

When the wall/ arch is complete, we'll be installing new light fixtures too!

This one will be over our dining room table: 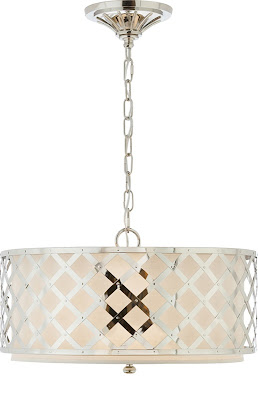 And we'll have two of these hanging over the island. 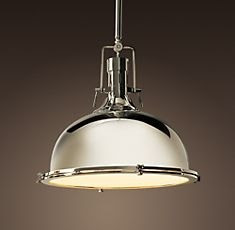