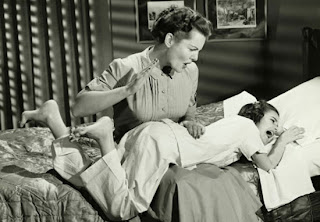 The time came. It was tonight, after a grueling day of dealing with my 2 1/2 year old daughter, adamant about not listening and defying my every word.

She spent 1/4 of the day in time out because she wouldn't listen to me telling her repeatedly NOT to do something-- and then following up by kicking and hitting me as I carried her to "time out". At one point I sat her down and asked her, "Does Mommy hit you?!" Of course the answer was no. I've never spanked my child. How am I supposed to instill the lesson in her that "hitting kids is wrong", if I turn around and hit her..? Well, the pot is officially calling the kettle black tonight.

It was time for bed and she kept trying to run from me. She then kicked me in the stomach when I had her cornered. So I picked her up and carried her back to her room and put her in her bed. She jumped out, charged at me and demanded I let her out so she could go watch "T.D.". The answer was no. So I picked her up again, put her in bed and I got kicked again. I didn't even flinch, I flipped her over and swatted her on the butt, twice. Her eyes swelled with tears quicker than I've ever seen. She looked at me like, "How could you?!". She was so scared and immediately started crying for her Daddy (who conveniently has a business dinner tonight).

I don't know what came over me. I just snapped. There have been times I've come close but I've always found the patience to breathe, and let it go. But today she was in rare form-- getting up and running from "time out" as soon as I put her there (something that she's never tried before). After 15 times of putting her back in that damn chair, she finally stayed, while screaming at the top of her lungs for the next 5 minutes. I guess the only positive part about that little fiasco is that we were at home and not in public.

After her nap today I even took her to get ice cream, thinking maybe she just had a bad morning and perhaps a little treat might remind her that Mommy is her friend and we should be kind to one another. Even that trip was a struggle, though.

I feel so guilty and awful right now. Part of me wants to go and lay in her bed with her and snuggle her, partly for her to understand how awful I feel about what happened.

Immediately after it happened, I slumped into the kitchen and opened a bottle of wine, where I then sat down to dwell on the incident. Then I started to make myself feel a little better about the fact that she still wears diapers (that shielded some of the blow, right?!), and about the fact that she wasn't "bare ass", getting spanked with a wooden spoon.

It's the look on her face after I did it that haunts me. Those tears. That look of shock and fear.

I think this could be a great lesson on boundaries though. I think maybe it could be useful in helping you understand each other....I don't want to (insert discipline here) because seeing you sad and upset hurts me, but just because I don't WANT to (spank you, ground you, put you in time out, etc.) doesn't mean that I WON'T. This is what I understand of teenagers anyway....the testing of boundaries to see at exactly that point they will be reprimanded and weighing the severity against the reward of doing whatever they have done. My parents didn't believe in spanking either....my Dad did ONCE spank me as well and I believe we had the same exchange. I was horrified and he was upset as well. I was told that I asked him, "Daddy don't you love me anymore!?". (Still proud of the killer response which may have saved my butt....literally lol). However as much as we were both pained (more emotionally than anything) I think we had a different and better understanding after that. Hope this (and the wine and a good nights sleep) helps!

Ok don't beat yourself up over it. Chances are she'll never remember it. Ava has been spanked more times than I can count. Just one or two swats. Spanking is one of the VERY LAST resorts for us when it comes to discipline and I'm guessing your Ava is similar to my Ava in the pushing the boundaries department. Sassy little things.

You're getting in the awful terrible phase of toddlers. My Ava is quickly closing in on turning four and I'm seeing a difference in her. A change. Less tantrums and time outs, etc. It will happen and it's a wicked struggle.

I feel your pain. I really do, I've been there so many times. Like you I don't feel that spanking is ok but ya know we are only human... we aren't perfect. We try our hardest to be perfect parents but it's just not possible. Everything will be ok. Hang in there. I understand.