Did you just shoosh me?! 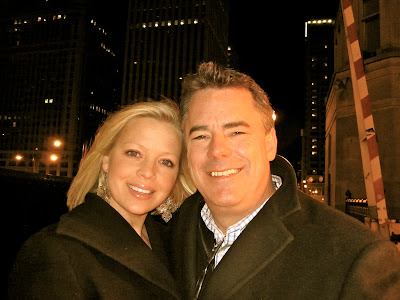 A few months back, as a gift to Ken for our anniversary, I booked a room at the W Hotel and bought tickets for us to see Mamma Mia-- and last night, we cashed it in! Ya see, I booked it when I was pregnant and I wanted it to be during a time where Jack was old enough to survive a night without me... and so I could drink myself into oblivion.

It was our first EVER overnight date night. And it was a hilarious evening, full of surprises-- and a few disasters.

Our sitter arrived at noon on Saturday and we left shortly thereafter to head downtown for our colossal date night. On our drive down I told Ken that he should lie to the hotel staff and tell them it was our 10 year anniversary-- just to see what perks we could score.

When we arrived, he pulled the anniversary card-- which landed us a free room upgrade. Not bad! We had a few bloodies in the hotel bar before heading up to the room to get cleaned up for the evening.

We had 5:00 dinner reservations at Mastro's, which came highly recommended by a friend of mine. The music at the joint was awesome, as was the food. After we asked for the check, a complimentary dessert was brought to the table. I could not keep the laughter in. "Happy Anniversary" was written on the plate in chocolate.

Next up, we were off to see Mamma Mia. After a few glasses of champagne, we headed into the theatre to check out our seats. Go me! They were awesome!

The show started and everyone was having a blast. People were dancing, laughing, etc. I was loving it. 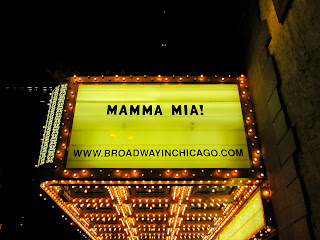 That's when it happened.

Halfway through the first act, the woman next to me shooshed me.

She actually shooshed me!

I couldn't believe it. I looked at her like, "Seriously?! Did you just shoosh me?! You do realize you're at a musical comedy, right!?"

People all over were laughing and moving to the music and here I am, stuck next to Grumpy McMiserable. I brushed it off and continued to enjoy myself despite her bad attitude.

A few minutes later, her douche-of-a-husband leans forward, looks at Ken and I and goes, "Hey! Knock it off! You two have been talking the entire show!". I shot back, "What are you talking about?! We haven't said a word! We are just enjoying the show!" Ken chimed in with a few choice words and the guy sat back and shut his trap.

I'm happy to say that nothing came of it. We returned to our seats for the second act and I made sure to have Ken sit next to them. And that was the end of their crabby commentary. 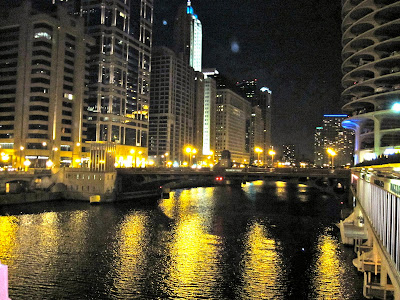 After all the drama from the sour-apple-couple, we decided to head to Trump for a drink. One drink for each of us-- and $32 later-- we decided it was time to venture on to a new spot.

After circling the loop for what seemed to be miles, we landed at Local 22 for some karaoke.

I don't think I've ever felt so old in my life. Everyone there had to be in their early 20's; Ken and I were definitely the old folks. Lucky for me, I got carded at the door. Ken didn't. ;-)

After bribing the DJ with entirely too much money, they called me to the stage. For some reason, I felt compelled to dedicate my song to "my little 12-week-old at home", where I received a lot of WOO-HOO's!  And I am happy to report it was the best rendition of "Red Neck Woman" I've ever done. Ahhhh. Liquid courage!

We made our way back to the hotel around 1 AM and managed to down a pepperoni pizza in 2 minutes flat.

We woke up today with pounding heads. Is the sun really that bright!?

We made it home to suburbia by noon to face reality (the babies). I sure do wish kids understood the meaning of a hangover-- their screams seemed so much louder today. Ironically, I found myself doing a lot of "shooshing" at them.

Thanks Jill for sending these adorable pics of the kids while we were out! And of course for taking care of them while we were allowed a night off. :) 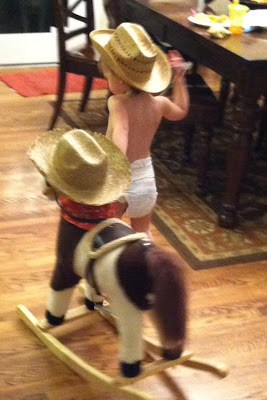 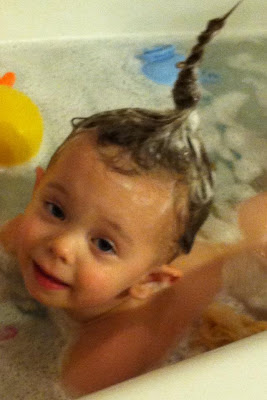 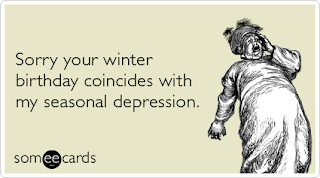 Man! Where have I been?! I haven't written in almost 2 weeks. Must be a record.

I know, I know. You must have been beside yourselves, just waiting to hear from me. ;-)

As I write this, I'm surrounded by two sick kids-- both diagnosed with respiratory infections while at the Dr today (don't be too startled--it's just a fancy name for the common cold).

Both kids are struggling with their normal routines due to trouble sleeping from a hacking cough. I've been averaging about 4 hours a night between the two of them-- demanding to be fed, diaper changed, juice cup refilled, etc.

All this creates a super tired Mommy-- especially considering I'm all on my own due to Ken being out of town since yesterday morning. He left for Dallas and won't be back till Wednesday-- which also means, I'll be celebrating my birthday for the first time without him in nearly 8 years (Thank God for good friends who have agreed to meet for sushi and drinks at Nabuki!). In the meantime, Ken is sending me pics of him, in front of Tony Romo's cubby at the Cowboy Stadium, while he is "hard at work". Nope, I'm not jealous one bit. Not at all. Jerk. ;-)

Looking back, I have to say, 32 was a great year! We were blessed with another baby and our family has grown beyond anything I could have ever imagined or hoped for. I also made some wonderful friends and taken amazing vacations. We even had some great, memorable date nights-- despite me being the DD to my schnockered husband.

So tonight as I bid my 32nd year adieu, I am throwing back a hefty glass of wine (think: goldfish bowl). All by my lonesome. Pitty party?? Perhaps.

I do hope my birthday brings a day of healthy, smiling babies though-- and a big, fat diamond from the hubs wouldn't be too bad either.

This is my daughter's bed. This is what it looks like every morning when she wakes up.

Just this morning she woke up, upset about the stool in her bed, screaming for me to "come take out my stool". Apparently the little hoarder doesn't recall bringing it (and 1000 other toys) into her bed before she passed out.

How the hell does one sleep with all that crap in their bed?! 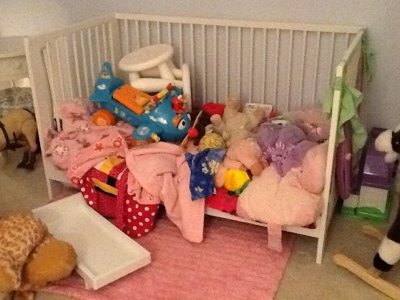