Happiest baby on the block!

I know all kids are happy... well I think they are for the most part, anyway.  But I think our little angel is EXTRA happy.  She has the best disposition... rarely cries (and I mean, hardly ever!)... loves smiling and loves giggling.  I'm posting some of my favorite smiley pics from the last month.  Enjoy! 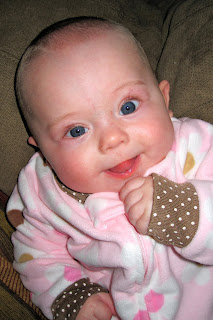 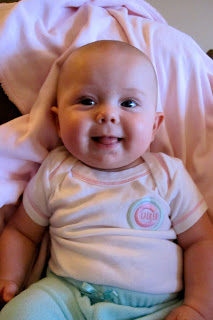 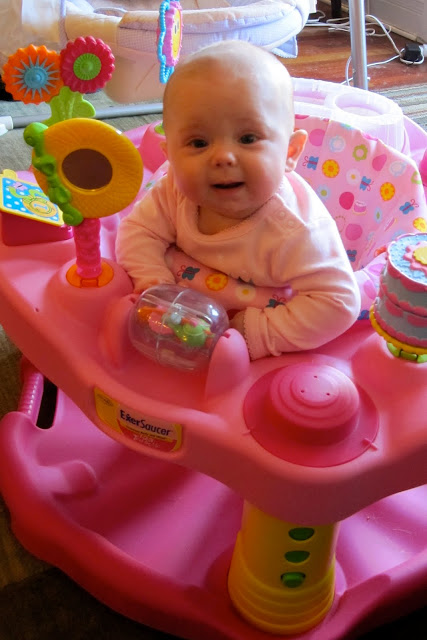 We went to see your pediatrician, Dr Weinstein for your 4 month appointment on January 9th. You now weigh 15 lbs, 8 oz. You've also grown to 24" long! I cannot believe that just 4 months ago you weighed just 6 lbs, 3 oz and were only 18.5" long.
Dr Weinstein looked you over and said you look fantastic! He even complimented me on doing such a great job with you! He didn't forget to mention how cure you are, either! He even said that you should be the new face for Gerber. He gave us the green light to start you on cereal. I was SO excited that I took you straight to the grocery store to pick up cereals and pureed fruits. I got you home, sat you in your bebe pod and told you how exciting this would be!!!
Before:

To say that you hated it would be an understatement! I was so bummed. I thought you would love the different tastes/ textures since you've been drinking formula for each and every meal for the last 4 months. I've tried some other combinations (oatmeal with pears, peaches & bananas). You do like pears and bananas... just don't seem to like the cereal. However, you will drink the cereal if I mix it with your formula and feed it to you in a bottle. I think we'll just keep feeding you by bottle for a while longer and try introducing you to the solids a little later. No rush in making you grow up!
Posted by Unknown at 1/18/2010 08:52:00 PM No comments:

Your first Christmas was a very special event! We arrived in Quincy on December 23rd, to Nana Norma's house. We had such a good time while we were there! We laid low on the first night... went to Auntie Steph’s house to visit their family. You and Dulaney played on the living room floor. We ordered from Tower of Pizza... one day you will LOVE their food!The next day was Christmas Eve. We went for the annual Bower family lunch at Krieger's. You were dressed in the most adorable outfit! Everyone was commenting on how alert, calm and (of course) beautiful you are! 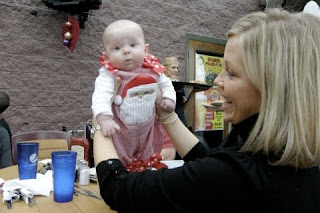 After lunch, we went to see Santa! You didn't cry at all! In fact, I think you were quite comfy lying there on his soft Santa suit! We got pictures of you with Dulaney on his lap... too cute! 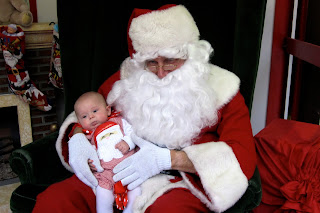 After that, your Daddy and I ran a few errands before going back to Nana Norma's to help get some of the food in the oven/ put you down for a nap. Lord knows that our Christmas can wear people out! 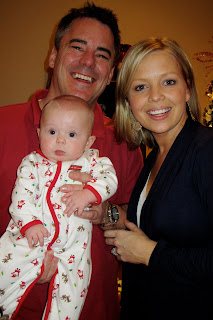 Dinner was delayed (as usual) so we ended up eating late, which meant I had to put you to bed right around the time that we started to open presents. So your Dad and I opened a lot of your gifts for you. And boy, did you get some great loot! So many wonderful toys! 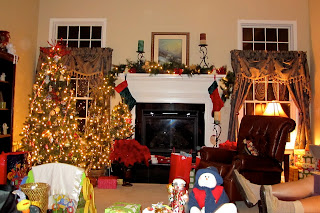 Your Nana made me a very special scrapbook.... all related to my pregnancy with you. It is amazing. I can't wait till you're older and we can look at it together. 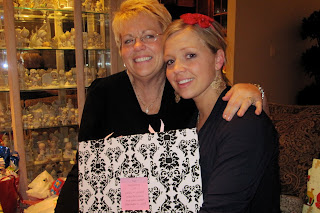 When you woke up on Christmas morning you were smiley! I think you knew that Santa had come! You were so cute in your pack and play that I went to wake your Nana so she could see how happy you were! I'm pretty sure you stole our hearts (again) that morning. We changed you and fed you... and then went to see what Santa had brought you. 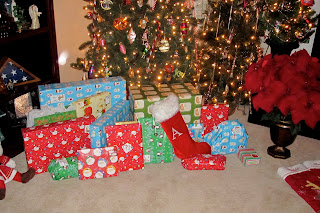 He brought you quite a few things must be because you're such a good girl! You got stuffed animals, rings, musical toys... he even brought me a book to help me learn how to teach you sign language! It was my most favorite Christmas morning EVER! 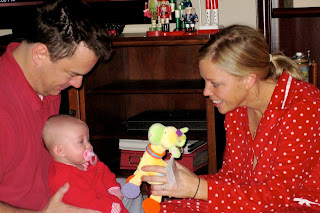 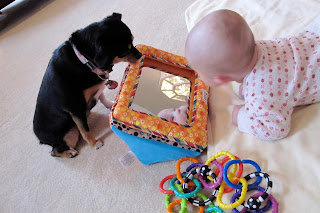 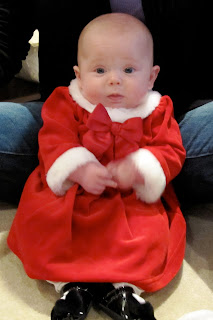 You really do make each day more magical. Later that day, we took you to my Daddy's grave. I wanted you to see where Papa Jack was laid to rest. We (Nana, your Daddy & I) asked him to look over you and make sure to protect you from any harm. I just know he was listening, looking down at your beautiful face. Oh, how he would have loved you! And you would have loved him, just the same. You'll meet someday, but not for a long, long while. :) 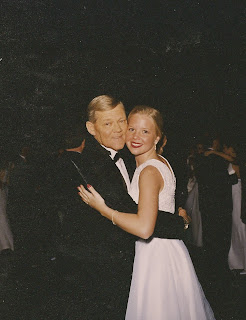 We laid low the rest of the weekend, not doing much but spending time with the family...and enjoying the beautiful snowfall. Everyone had to get their fill of you before we headed back home to Chicago. We got the best pictures of you!! I can't wait to show them to you! 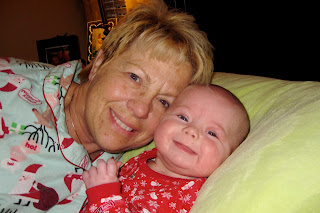 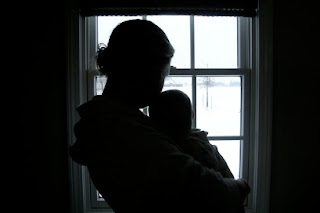 Sorry for the delay in posting, although I'm pretty sure the only person that reads this blog is my Mom. As soon as my Mac is repaired (from the GIANT glass of wine that was spilled on it) I will be back in action with sweet stories of Ava. I've been keeping detailed notes so I don't forget to share all of the cute things she's up to. Oh, and the pics are even better! See ya soon :)
Posted by Unknown at 1/13/2010 08:54:00 PM 1 comment: